In order to explain raag one can start with the undeniable fact that music and its basic elements are universal. The only differences can be the way they are sung (different genres) and interpreted, meaning; the type of music that you listen to will be dependent on your own background, culture, language etc. So, then it is true to say that the way in which one interprets music is dependent on what part of the world you come from or are related to.

Classical music is an acquired taste in all cultures and related to the region that it is from. The reason why it is acquired taste is because it did not develop from the local and masses of people. Although the flavour of Indian classical music is related to the region that it is has emanated from, the aesthetics and principles of North Indian and South Indian classical music are formed from thousands of years of history, philosophy and from trial and error.

This form of music is thus separate from folk or pop music and over the years it has been defined, structured and one is required to strictly adhered to the tenets formed as a result of this development.

The North Indian tradition has been particularly developed in the Mughal Era, refining and defining and a performance of raag for that matter, will not be correct without truly knowing the tenets.

Surbandhan thus emphasises on the appreciation of history philosophy and culture associated with that music which becomes very important to fully benefit from it.

Raag is the backbone of Indian classical music. Carnatic music (South Indian music) calls it Raagum. In the western world it is even referred to as Raaga.  Raag literally means the dye. It refers to a colour of an emotion and the melody that is used to express that feeling or emotion. A raag has a set of notes arranged in ascending and descending order which must contain a minimum 5 notes each way. This will make it an audav audav jwati raag. Jwati means then, the number of notes make up that particular melody.

So, we have established that a raag, in order to be pure (in pure classical) will only use the notes that are prescribed and may have to omit some notes and will have to follow a chalan.

Chalan treatment of Notes and Ornamentation

An integral part of identifying a raag is its’ ‘chalan’ which means the combination or phrases used within the rules of the raag. This is what makes Indian classical music totally different than any other form of music. Only specified notes can be sung, in a specific order and treated in special ways, in order to invoke the emotion of the raag successfully. So, together the chalan and specific ornamentation of the raag also distinguishes one raag from the other.

Example of a Raag

For example, let’s take raag Yaman, one of the longest standing raags and its notes consists of the sampurna sampurna jwati notes (all 7 notes). That is, S R G M P D N S with a variant of M (tivra M). Sung in a straight way, however, it still would not sound like Yaman. Now, sung N R G M P- R-S, which follows a strict order and sung with ornamentation that is appropriate for this raag (more on ornamentation below). In this example an important rule is that when you get to P it is not acceptable to go on to D N S. It would be sung as such, N R G M D N S, S N D P M G R S or S N D P- R G R N R S.

Alankar (ornamentation) becomes very important in distinguishing raags.  These are the use of meend (glide from note to note) or gamak (vibrating on same notes) or using kanswar (touching slightly on other micro notes while singing a main note). The order and chalan is crucial in differentiating raags as some raags do have otherwise, same notes in a similar or same order. The way the notes are approached and treated and the identification of the vadi, samvadi, anuvadi, vivadi, varjit notes will assist to determine the raag. In the above example then when you get to P you will come down to R with a meend and the rest of the phrase, GR NRS will also be also sung with Meend which gives it the sound, emotion or colour of raag Yaman.

See below some of the projects that we have completed in past years. Please do come to our events and get in touch via email or via the contacts page on our website so our upcoming events. Please also visit our Facebook page as shown above and other social media outlets where you will regularly get updates on upcoming events. 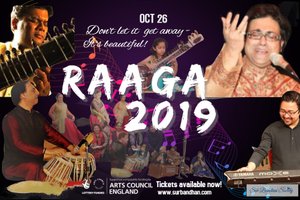 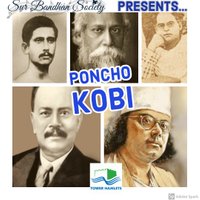 Who are the Pancha Kabi

"Pancha Kobi" refers collectively to the five major Bengali poets and music composers at the same time. Pancha means Five and Kabi means Poet. However, both their poems and songs are remarkably significant in the development of Bengali music and literature. While their work possess similar kind of literariness, hence they were grouped together as the "Pancho Kobi". All these poets were born between 1861 and 1899 and the youngest of them died in 1976.

The Pancha Kabi are: Rabindranath Tagore, Dwijendralal Roy, Rajanikanta Sen, Atul Prasad Sen and Kazi Nazrul Islam. The group begins with the Biswakobi and ends with our rebel poet. Other three poets are lesser known to this generation. However, they are equally important as they have tremendously contributed in making Bengali music artistically and aesthetically richer and deeper. "Pancho kobi" of Bengal wrote on patriotism, nature, monsoon, human relationships and so on. Moreover they have many songs that incorporate the North Indian classical tenets. Surbandhan beleive that their lives and works must be known to this generation and to the world.

Music lovers would have heard of Sur Bandhan Society (Surbandhan). In an increasingly multicultural setting, the organisation seeks to bring South Asian music to the heart of London, bringing together existing lovers of Indian Classical music as well as newcomers to the genre with the intention of providing both enjoyment and musical growth to all. Surbandhan, now become a leading provider of events, paving the way for the growth of Indian Classical Music within the United Kingdom. Established in 2011, the movement has caught the attention of the most senior and world class artists and seeks to expand its reach even further.
Since 2016, Surbandhan has consistently brought a series of raag based programs starting with Mughal to Modern, Raaga is a Human Right and Raag Probaaho to the UK, partnering with the Arts Council, Tower Hamlets Council and others with the objectives of promoting and spreading raag based compositions. Educating about the importance of Indian Classical Music’s heritage and history, Surbandhan highlights the interlink between arts and culture across South Asia to promote harmony between migrant communities.
Most recently, on 16th June 2019, as part of Surbandhan’s Raag Probaaho series 2019, Surbandhan featured the well-loved golden voiced artist Alaur Rahman to sing in their program, Thumri and Ghazal Soiree, which was a roaring success.
The event was opened by an immaculate chorus of Tagores Eso shyamolo shundoro by the Surbandhan team led by Piya Mayenin on harmonium. The other singers were Shahadat Hussain Masoom, Asma Matin Ruby and Yasmeen Rahman, Ratna.
After greetings were conveyed by the executives of the organisation, the musical show continued with the rendering of raag based compositions including Nazrul, Tagore, Thumri, Dadra and more. The added poetry from well-known poet Asma Matin and her grandson, Yuannes Alam and charming garland presented with artistic grace and Urdu shaiyri, by presenter Yasmeen Rahman added to the delight to the well-rounded start to the program.
Amongst audience members there was Soumyen Adhikari, a prominent singer form Calcutta and other well-known community singers such as Ameen Raja and Ina Khan. The only setback was a delay in the start of the program.
Accompanied by Sandy Man and Amith Dey, the team performed Tagore, Nazrul, light classical one could see the focus of the event was on different raagas and unique taal. Raags heard were marua, khambaj and bahaar, chhayanaut, yemen and purobi (purvi) and taals.
Artsist, Rick Sinha who was to do choto khyal, had a death in the family and was missing from the performance.
The evening came to a climax with the well-loved and long-standing artists in UK, Alaur Rahman ended the soiree with his golden smooth voice of magical thumri and ghazal with the famous Kya karoon sajni aye na baalam sang by Bade Ghulam Ali and Kab Aaogey that was famously sang by Fateh Ali Khan A heart touching favourite of Mehdi Hassan, Gulon mein rang was devoured by the audience and a couple of other ghazals ended the evening.
The UK has most awaited a platform like Surbandhan and it has been welcomed by the likes of Sanju Sahai, Mehboob Nadeem, Chironjeeb Chakravarty, Fida Hussain Khan, Sajali Roy, Lucy Rahman, Fazlul Bari Babu and other artists of excellence. Its audiences have seen eminent community members of the community including Dr Halima, Dr Hasanat Hussain, Abdul Karim Goni, Mohammed Salauddin and many others. The executives of Surbandhan are happy with the shape that the future of South Asian music in UK has taken and vows to continue the good work of bringing to larger audiences, consistent good raag based music and arts and may it long keep coming.

Sur Bandhan Society is a leading multicultural Arts organisation run by a group of established and emerging artists with passion for Indian Classical Music since 2012. In 2017 Sur Bandhan started the #RaagaFestival , which they try to hold every year. Also, #Raagaisahumanright in 2018, and #RaagProbaho in 2019, all being projects that provided quality workshops and events of Indian Classical and Semi Classical music Surbandhan creates a vibrant multicultural platform bringing together artists regardless of how big or how new they are.